Node.js under a Microscope: CPU FlameGraph and FlameScope

Last week, I had an opportunity to talk about profiling Node.js applications on production at an internal guild meeting at work. Here is a written version of it plus some additional information.

I have been working on Node.js microservices, which fetch data from API servers and render HTML with React, at work. We monitor response times at load balancers, in application metrics and with distributed tracing with OpenTracing. One of the microservices had a weird gap between 99 percentile response times of itself and its dependencies. It was spending an extra 500 milliseconds—but I didn't know why.

My first suspect was the network. It is the place full of uncertainty. After learning and trying different commands and metrics, I took tcpdump and checked packets one by one with my eyes and a script. There were no significant delays that I had expected. So I had to stop blaming the network—or someone else.

Because the weird latency was happening in the application itself, I wanted to know what's going on in it. There are mainly two ways to achieve this: profiling and tracing. Profiling records some samples and tracing records everything. I wanted to do it on production, so profiling was naturally a good fit because of its smaller overhead.

For Node.js, there are mainly two different tools. One is V8 profiler, and the other is Linux perf. V8 profiler uses the profiler provided by V8. It covers all JavaScript executions and V8 native functions. It works on non-Linux operating systems. If you use non-Linux machines, it might be pretty handy. On the other hand, Linux perf can profile almost anything including Linux kernel, libuv, and all processes on your OS with minimal overhead. However, as the name suggests, it works only on Linux. According to Node CPU Profiling Roadmap, it seems that V8 profiler is the one officially supported by the V8 team, but Linux perf will keep working for a while. After all, I picked Linux perf because of low performance-overhead and small intervention to applications.

Now we have human-readable stack traces, but it's still hard to browse thousands of stack traces and get insights from them. How can we efficiently analyze them? 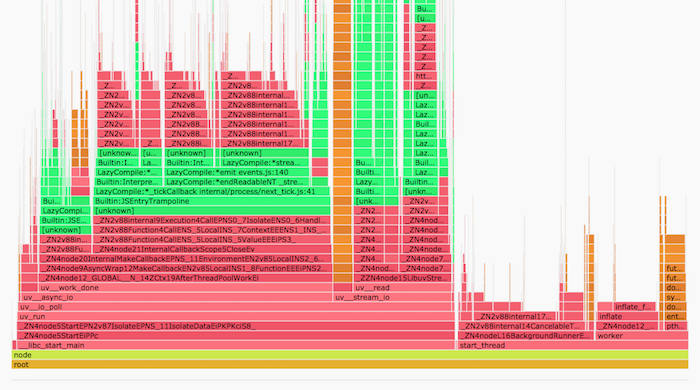 A CPU Flame Graph from a sample application

I found some insights about the application on production with CPU Flame Graph:

FlameScope by Netflix is another great tool for visualizing stack traces in a time-series. It shows a heatmap out of stack traces. Each cell represents a short amount of time, 20 ms if 50 cells per second, and its color represents how many times the process was on-CPU. It visualizes patterns of your application's activity. 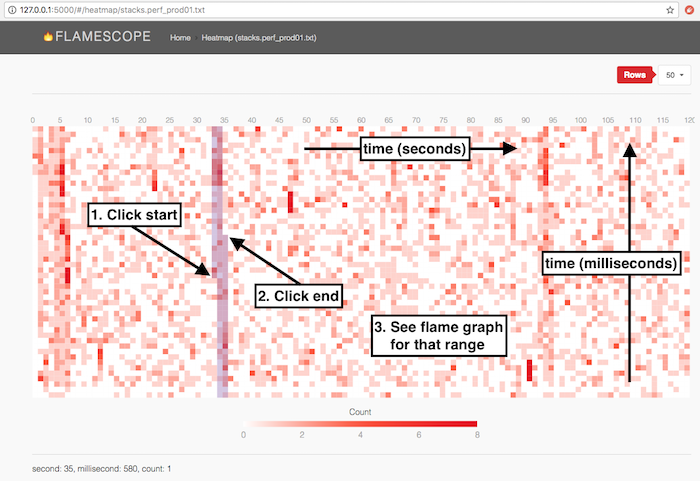 If you select a time range on the heatmap, FlameScope shows you a CPU Flame Graph of the range. It allows you to examine what happened when in details.

To use FlameScope, check out the repository and run the python server. Then put stack trace files from perf script into examples directory, and open http://localhost:5000.

I found a couple of exciting insights about the application on production using this tool.

The master process was aggregating application metrics from worker processes, and it was responding to metrics collectors a few times in a minute. When the metrics collectors asked for data, the master process calculated percentiles of response times and prepared a JSON response. The percentile calculation was taking long time because the application had a lot of metrics buckets and the library that we used was using JSON.stringify() and JSON.parse() to deep-copy objects!

FlameScope showed that the worker processes were not overloaded for most of the time, but they had a few hundred milliseconds of CPU-busy time in about 10 seconds. It was caused by mark-sweep and mark-compact garbage collections.

The application had an in-memory fallback cache for API calls that was used only when API calls and retries fail. Even when API had problems, the cache hit rate was very low because of the number of permutations. In other words, it was not used almost at all. It cached large API responses for a while and threw them away after the cache expired. It looked innocent at first glance—but it was a problem for V8's generational garbage collector.

perf script collects symbols for function addresses from program binaries. For Node.js, we need something special because functions are compiled just in time. As far as I know, there are two ways to record symbols:

In addition to the above, there are a few more Node.js options that you can use to improve your stack traces—though I haven't tried them on production because the stack traces were already good enough for me:

It gets a bit tricky when you are using containers to run your application. There are two ways to use Linux perf with Docker:

I eventually chose the option 2. I tried the option 1 first but gave up because I was using Alpine Linux as the base image and it was hard to make Linux perf available on it.

To run perf record in the host OS, we need to figure out pid of the application process in the host.

perf script collects symbols from binaries and symbol files to get human-readable function names. It needs to be able to read the binaries whose functions were recorded with perf script and /tmp/${pid}.map files that applications generate. However, perf script in the host OS cannot read them with the same file names as the container can. (It seems that this is not the case anymore with the latest Linux kernel because its perf command knows containers. But it was the case for me because I was not using the latest kernel.)

I learned how to overcome the issue from Making FlameGraphs with Containerized Java. I just copied necessary files from the container to the host.

To copy symbol map files, we need to find the pid in the container. We can do it by checking /proc/${host_pid}/status.

Now everything is ready! Then we can use perf script as usual.

I set up a sample project for profiling a Node.js application on Docker. It was nice to practice profiling a bit before doing it on production!

There are some gotchas to profile Node.js applications on Docker with Linux perf. It took some time for me to figure out how to do it because Node.js and Linux evolve day by day and I couldn't find many up-to-date resources online. I hope this post is helpful!